Last weekend I visited Myrtle Beach, and thanks to the great folks in their media relations department I was able to interview Braves shortstop prospect Mycal Jones before the game. Jones has a very calm demeanor and is a bit soft spoken, but not shy. He gave me a great interview that I'm sure all of you will enjoy. He was much more candid than most players are, and he didn't give the recycled answers that so many professional players tend to give during interviews. 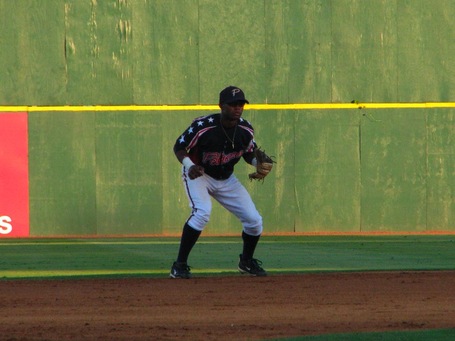 Here is my interview with Mycal Jones from July 3rd, 2010:

Martin Gandy: How are things going here in Myrtle Beach for you.

Mycal Jones: Having fun, doing what I love.

MG: You started off slow this year in Rome. You hit .125 in April and then you turned it around and have hit .360 since then. What adjustments did you make?

MG: Describe that approach to the pate.

MJ: I just look to be comfortable, and once I started switching things up I was uncomfortable. I was hearing things from different coaches, and rovers come in, but now it's just being myself and being comfortable at the plate. Now that I'm doing that I'm seeing the ball pretty good.

MG: Does anyone give you advice now that you're hitting well?

MJ: [laughing] Not really, they just tell me to keep doing what I'm doing.

MG: In early innings of games, the first time you see a starting pitcher, you hit around .250, but then in the middle and late innings you're a .300-plus hitter. Are you a batter that needs to see a pitcher first, or does it take time to get into the swing of the game?

MJ: I've noticed that myself. When I was in Rome [I told] one of my good friends Jordan Kreke, 'I never get hits my first two at-bats.' I'll get out my first at-bat, 'all right, there's the first one.' I'll get out the second time, and sometimes I still end up going 2-for-4 or 2-for-5. Honestly I don't know what it is.

MG: I've noticed that you're 7-for-12 bunting this year, why don't you bunt more?

MJ: [laughing] I don't know. Third baseman they know I can run so they play on the grass a lot. I have started bunting more lately, especially when I was hitting third in the lineup. They would play back since I was hitting third, I guess they thought I had a lot of power, and I would just lay one down. Especially with two outs, I'd lay one down, steal second and try to get into scoring position. But you can definitely look for me to start bunting more.

MJ: Honestly I still think I do have that homerun swing. I've really been working on it, especially with two strikes, trying to cut my strikeouts down and put a ball somewhere in play, run hard and use my speed more.

MG: How do you like living in Myrtle Beach?

MJ: Definitely no complaints, I love it here. It's a lot better than Rome.

MG: Would you be disappointed if you got promoted to Mississippi?

MJ: No. [laughing] I would miss living here in Myrtle Beach, but I'd be one step closer to the Major Leagues, where I want to be.

MG: You went to school in Miami, are you a beach guy?

MJ: I wouldn't say I'm much of a beach guy, I'm more of a big city guy. I'm from Jacksonville, which is a pretty big city, and went to school in Miami. It was kind of a culture shock playing in Danville last year and Rome this year... it was a big difference being that it was a small town and not much to do there at all.

MG: This year you've done pretty good against both left-handers and right-handers, but last year you really struggled against left-handers. Did you make any adjustments there, or is that just part of the learning curve?

MJ: I think it's part of the learning curve. I've told people this before, but I'd rather see a right-hander throwing 95 than a left-hander throwing 85. I have a problem sitting back and waiting on slow pitching. I'm very aggressive and I like to attack the fastball. A lot of times finesse lefties throw change-ups and fastballs outside, and it's just a matter of me waiting and trying to hit the ball to the right side.

MG: You do seem to use the whole field when you hit, is that intentional?

MJ: It varies. In some situations.

MG: I was watching you in batting practice, and you started off hitting the ball to left then you sprayed the next few pitches all the way around the field to the right. So is going to all fields is something you practice?

MJ: I always practice that. Most of the time in my first round I try to go to right field, just to keep my bat through the zone a little longer. That way if the pitch is in I'm keeping them fair and not pulling them foul.

MG: But your power is to left field, isn't it?

MG: Your first game here in Myrtle Beach you hit a walk-off home run, was that your best moment in professional sports so far?

MJ: Close. Between that and winning the championship last year in Danville, that was very special. You always love to win a championship and dog-pile on the mound. But that was my very first time hitting a walk-off, any kind of walk-off, better yet a home run. It was a wonderful feeling.

MG: On that Danville team you got pretty close to Kreke and Weaver and all those guys who are still back in Rome. Was it hard to leave them?

MJ: I definitely miss those guys, but all year, honestly out of spring training I was hoping to start here. But I ended up in Rome, I did my time there. I talk to those guys all the time and tell them to hurry up and get here. It's a lot better than Rome.

MG: So you expected to start here and then you didn't, could that have contributed to your early season slump in Rome?

MJ: I don't think so. I was disappointed to start in Rome, but those guys are professionals at what they do -- up in the front office -- and they knew I had to do my time in Rome, and work out some kinks here and there, and I guess they were right, with me hitting .125 in April. They knew I needed to work on some things there. It's their call, I can't control the decisions they make, I just go out and play everyday as hard as I can.

MG: How are you liking profession baseball so far?

MJ: It's better than a nine to five.

MG: Have you ever had a nine to five job?

MG: So how do you know it's better?

MG: Tell us something about you that maybe we don't know?

MJ: Honestly I'd rather be playing football or basketball than baseball. I played in high school and just didn't have the size to play at the next level. I was 5'8" and 145 pounds when I graduated high school. I love those sports to death. I'll watch basketball or football, I'll sit down and watch a whole game, but I never really watch baseball.

MG: How is it having three Jones' on the team?

MJ: You hear jokes like, 'awe, you're the worst Jones on the team,' from hecklers like that. At one point we were all hitting 3-4-5 in the lineup and it was pretty cool. And having two Michael Jones' on the team is pretty cool. Some of the Latin guys they joke with us, 'hey Jones,' and we all three turn around, or just one of us turns around, 'no not you, the other one.'

MG: You've seen tonight's starting pitcher, Julio Teheran, at three different levels. You saw him at Danville, Rome, and Myrtle Beach. What can you tell us about him? Is he the best pitcher you've seen?

MJ: I faced him in spring training, and that day I could tell he didn't have his best stuff. But just from watching him from shortstop he has some dominant stuff. He's a special kid. He throws three pitches for strikes whenever he wants, and he runs his fastball up to 95-96. I heard in the All-Star game he hit 98. When you've got a fastball like that and the off-speed stuff that he does, it's pretty tough being in the box, and just to think he's only 19. The fact that he's doing it all in advanced A-ball is pretty amazing.

MG: When he throws one of his fastballs do you ever turn around and look at the speed of pitch on the scoreboard?

MJ: Oh, all the time. You can tell he kind of pumps up. Him and Arodys Vizcaino are the main ones who can get it up there.

MG: How about Randall Delgado, what do you think of him?

MJ: I didn't see him much until I got here, but he's got some real good stuff from what I've seen so far. He can get it up to 94-95. Honestly I always look back to check the radar.

Thanks again to Mycal Jones for such a great interview. I'll be in Danville and Salem at the end of the month, so I'll try to arrange for some more interviews with some of our prospects.