Whoever said "lightning never strikes twice" clearly was not intending that "lightning" be used as a metaphor for "late inning, go-ahead Brooks Conrad grand slams" (and also clearly was not familiar with lightning rods). The "Raw Dog" came through again tonight in a big way, hitting a huge tie-breaking grand slam as part of an epic 8-run rally in the Braves' 8th inning.

Let's set the scene: the Braves entered their half of the 8th down 5-2, with few clutch hits to speak of. Marlins reliever Taylor Tankersley started the inning off by giving up a single to Jason Heyward. Chipper Jones followed by hitting one to the right defender--Jorge Cantu, otherwise known as "The Butcher of Third Base." Cantu booted Chipper's chopper, and everyone was safe. The next batter, Brian McCann, was hit on the arm with a pitch. Honestly, we were pretty lucky that he was awarded first base, because he clearly leaned into it.

The Marlins brought in Jhan Martinez to face Troy Glaus with the bases loaded and no outs. He walked to make it 5-3. Next up was Eric Hinske, who smoked a single over Dan Uggla's head to score two runs and tie it at 5. That was a huge play, too, though it would be overshadowed by later events. After that, Burke Badenhop came on to pitch. Bobby Cox called for Alex Gonzalez to bunt the runners over, which was really stupid because Nate McLouth was due up next. The Braves dodged a bullet when Cantu couldn't find third base with his foot to get a force out on the bunt. Everyone was safe, and the bases were again loaded with no outs.

Next up was McLouth, who did the predictable thing and grounded to first for an easy forceout at home. But his continued ineptitude didn't hurt the Braves tonight, for Conrad was up next, and he blasted a ball in to the right field seats for his second huge grand slam of the year. The Braves didn't stop there, either. Martin Prado and Jason Heyward (again) singled, and Prado scored the Braves' 8th run of the inning on a Chipper Jones groundout. That made it 10-5, Bravos.

The reason the Braves needed to come back was that Kris Medlen had his worst start of the year. He gave up a 2-run homer to Brave killer Dan Uggla, a solo shot to rookie Mike Stanton, and five runs in all. He did have 8 strikeouts and only 1 walk, but any time you give up 8 hits and 2 homers in 6 innings, you're not going to be pleased with the stat line. His WPA was -0.236, but the Braves bats bailed him out nicely.

Unclutch Plays
McCann grounding into an inning-ending DP with a runner on third (-0.145)
McLouth grounding into a force at home with the bases loaded and no outs (-0.105 WPA) 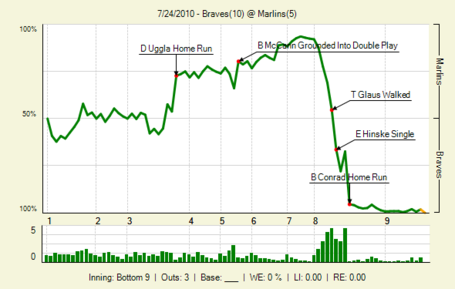