Here's the next round of picks for the Braves, 16 through 30, which closes out day 2. Lots of interesting things going on with these picks. There is a definite Senior college pitching trend. The Braves draft several kids who fell from the first few round in hopes of signing them away from college commitments. And finally, the Braves make family ties a theme.

Dan Winnie (16th round, 494 overall), RHP - A relatively unknown right-hander out of Lackawana Junior College in Pennsylvania. He's the third player the Braves have taken out of the state of Pennsylvania, all before they've selected a single player out of Georgia.

Stefan Sabol (17th round, 524 overall), C - The cousin of pro football player Troy Polamalu, Sabol is one of the top all-around athletes in the draft. While he's listed as a catcher, he profiles as a five-tool outfielder in the pros. He's committed to Oregon as one of the top prep catchers, but the Braves may be able to lure him away with an above slot bonus. This may also be a summer follow pick for the Braves as they see how Sabol adjusts in a wooden bat league.

Zach Alvord (18th round, 554 overall), 2B - The first player taken in this draft by the Braves out of Georgia, and like the last pick of Sabol, Alvord is a big under-draft by Atlanta. He was ranked as one of the top-200 prospects in the country and was considered a tough sign away from his commitment to Auburn. He's still one of the top prep hitters in the state and strong for his size. Like Sabol, the Braves may view him as a summer follow, and someone they will try to sign away from college with an above-slot bonus. The Braves have taken several similar picks around this point in the draft in previous years. Perhaps being drafted by his home-town team will sway Alvord to sign, but odds are he'll opt for college.

Tyler Hess (19th round, 584 overall), RHP - An unranked player out of California, but an interesting pick by the Braves. He was a top prep talent coming out of high school, and continued that success his first year at Pepperdine, but fell on hard times and eventually transferred to Sonoma State with two other Pepperdine teammates. He revived his career in Sonoma and has a big 6'5" 240 lbs frame that pro scouts love.

Jason (Jay) Mowry (20th round, 614 overall), OF - An unranked Junior College center fielder out of St. Petersburg J.C. in Florida. He'll participate in the wood bat Florida Summer Collegiate League, and will likely be a summer follow for the Braves.

William Beckwith (21st round, 644 overall), 1B - A Junior College first baseman out of Wallace State Community College in Mississippi. He's a stocky first baseman with good power. As an unranked and unknown prospect, this is the exact kind of player the Braves have been great at finding in the JuCo ranks the last few years. His build might remind some of RSF.

Jordan Buckley (22nd round, 674 overall), OF - A raw toolsy Junior College outfielder from New Mexico. This year was his first year focusing solely on baseball, and while he struggled at times, he showed a lot of potential. He's a terrific athlete who projects to go from the JuCo ranks to a four-year school, but he hasn't made a commitment yet, so he could be a signable player, though it may take a bit of above-slot money. If he does sign, he's a project and by no means close to a finished product.

Evan Gattis (23rd round, 704 overall), C - A JuCo catcher out of Texas, ranked 120th in the state. He was originally an Aggie recruit, but ended up going to a rather obscure (at least to me) Junior College. He's a good receiver and has a quick bat with some power. Reminds me a bit of Jace Whitmer from last year's draft. The Braves seem to love big-framed catchers, even if they don't stay at catcher.

Evan Daniel (24th round, 734 overall), RHP - Daniel is the perfect example of a summer follow, and someone the Braves will definitely do that with. He was projected to go in the first several round with a fastball in the mid-90's, but that was before Tommy John surgery last summer. He'll be back on the diamond this summer and the Braves will take a long look at him, though he still may require an over-slot bonus, but if he is back to form he may be worth it. 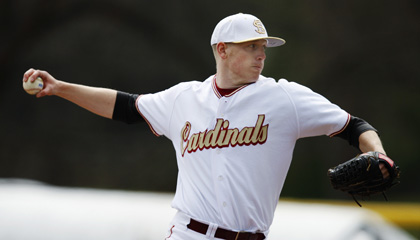 Dan Jurik (25th round, 764 overall), RHP (pictured on the right) - The St. John Fisher College Male Athlete of the Year, and the most successful pitcher in their 23-year history, a Division III school. He was also named the conference pitcher of the year. He's a polished college senior, and a good pick from an area of the country (New York) that the Braves seem to have scouted very extensively this year.

Jonathan Burns (26th round, 794 overall), RHP - A senior pitcher, and a closer out of St. Edward's in Texas. The former Hilltopper brings another polished approach on the mound. A potentially interesting find for Atlanta.

Willie Kempf (27th round, 824 overall), RHP - Another, yes another college Senior pitcher. He came up big for Baylor in their abbreviated run towards the College World Series, including a 20.1 scoreless inning stretch. He credits his new found success to a cut fastball, a pitch he developed since last season. Read more here -- great article.

Kyle Mertins (28th round, 854 overall), RHP - Guess what? Another college Senior, this time from Cal State Fullerton. Before pitching for the Titans, he was a product of Santa Ana Community College, another place that the Braves have scouted and mined in the past. He's a power reliever, throwing in the mid-90's. Kind of reminds me of another Santa Ana CC alum who was drafted by the Braves -- Kris Medlen.

Reid Roper (29th round, 884 overall), SS - An Illinois recruit, this talented prep player is a two way talent, excelling as both a pitcher and a hitter. He will be a tough sign away from the University of Illinois.

Kenny Fleming (30th round, 914 overall), OF - The brother of the Braves 8th-round draft pick, and the son of the Braves East Coast crosschecker, it looks like the Braves are trying to wrap up the entire Fleming family. Fleming was playing at Shelton State C.C., and will likely be a summer follow in the wooden bat Valley Baseball League.

The draft resumes tomorrow with picks 31-50.