And here are the final five. Or the first five, however you want to look at it.  Sorry for the last post. 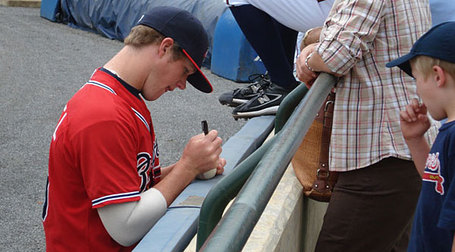 1. Craig Kimbrel - B/T: R/R, Born: 05/28/1988, Ht: 5'11" Wt: 205 - Craig Kimbrel put together one of the most memorable seasons from a minor league/rookie reliever that I can remember. You can read more about his excellent major league season here. Craig did shuttle back and forth between Atlanta and Gwinnett a couple of times this season. When he was in Gwinnett he pitched 55+ innings, posting a 1.62 ERA, 23 saves, 28 hits allowed, 83K (13.4 K/9) and 35 BB (5.7 BB/9).  He overpowers hitters with a fastball that runs from 95-98 with heavy sinking movement that induces ground balls on the rare occasions hitters actually make contact with it. His fastball can be so overpowering that hitters have to sit on it and react awkwardly when he throws his breaking ball which was much more consistent than in years past giving him a second plus pitch that makes facing him even more unfair. The only knock on Kimbrel (and it has the potential to be a big knock) are the copious numbers of walks he yields. The silver lining in that cloud is that he improved each month he spent in Atlanta posting a 33.3% walk rate in May, 17.4% in June and finally just 7.9% in September where he saw the most use. Kimbrel has all the makings of a frontline closer for the next several years as long as he can keep the walks under control just enough so they don't hurt him. Look for him to get every chance to win the closer's job out of spring training.

3. Stephen Marek - B/T: L/R, Born: 09/03/1983, Ht: 6'2" Wt: 230 - The last remaining piece of the Mark Teixeira trade, Stephen Marek did his best to recoup some value this season. After an abysmal 2009 season that saw him walk 36 batters in 45 innings and post a combined ERA of 6.00 most people had written Marek off as a lost cause. 2010 was saw a completely different player emerge as he reeled off 13 innings of scoreless baseball in Mississippi before getting a promotion to Gwinnett where he didn't slow down much going on to post a 1.43 ERA in 50 innings along with 56 K and just 19 BB. He is a big bodied pitcher who can get his fastball up to 95 with a good slider that produces it's share of swings and misses. The key to his success in 2010 was his regained control and 2009 is looking more like an anomaly than his true talent. Look for him to get a shot in spring training if someone else falters.

4. Cory Gearrin - B/T: R/R, Born: 04/14/1986, Ht: 6'3" Wt: 205 - 2010 saw Cory Gearrin get lost in the shuffle in Gwinnett when Dunn, Marek and Kimbrel were all posting sub 2.00 ERAs, he was just going out doing business as usual. He followed up a stellar 2009 season with a solid showing in Gwinnett, posting a 3.36 ERA in 80 innings with 66K and 32BB. One of the biggest reasons he succeeded in 2009 is that he walked just under 6% of the hitters he faced which was a huge improvement over his previous efforts. He regressed a bit in 2010, walking closer to 10% of batters he faced. He has also seen his K% drop from from the 30% range in 2007-2008 down to 19.4% in 2010. Cory brings the ball from a low sidearm slot that puts lots of sink on his fastball that induced more than 60% ground balls this year. He also throws a solid slider that works as his out pitch. Cory was recently added to the 40 man roster and will get a long look in spring training but seeing as Peter Moylan currently holds the position of sidearming ground ball specialist expect him to start the year back in Gwinnett waiting for the first opportunity.

5. Kyle Cofield -  B/T: R/R, Born: 01/23/1987, Ht: 6'5" Wt: 230 - Kyle Cofield has been around for a long time in prospect years but is still just 23 years old. He has always been known as a hard thrower with a good pitcher's body but has never produced the way a fireballer should, posting low strike out totals and living off his ability to induce ground balls. He gained some notoriety in 2010 when he stuck around big league camp longer than anyone anticipated when Bobby Cox developed a man crush on him. He was eventually cut and started the season in Mississippi (on the 40 man roster) but missed nearly 2 months due to an injury. Before the injury he had been used primarily as a starter for most of his career, but once he returned he pitched out of the bullpen and that will likely be his ticket to the majors. In the past he has struggled with his control (he issued 89 walks in 2009) but in 2010 he cut nearly 5% from his walk ratio in 2009 while raising his K% from 13.*% to 15.4%. With so many guys slotted ahead of him Cofield has an uphill battle in getting to the majors, but don't be surprised if he gets a longer look than anticipated for a second straight year and eventually makes his debut if injuries take their toll.