If you'll remember back one week ago to the previous regular fan confidence poll, the Atlanta Braves had barely managed one win against the last place Nationals in the middle of a pennant chase, and had lost the Wild Card lead -- their end of season collapse was all but a fait accompli, and the fan confidence had plummeted to 52 percent.

After the Monday poll and a sweep of the Marlins, a second poll showed the fan confidence was unchanged at 52 percent, and the Braves still had to face the powerful Phillies. For the first two games and up until the final out of the last game the fan confidence was likely still a question mark, but the last minute style of this season reared its head one last time and saw the Padres lose and the Braves continue to play on.

The fan confidence jumped from 52 percent last week to 75 percent this week -- a number that high hasn't been seen since late August. Braves' fans are excited, and they should be. The Braves drew probably the easiest first-round matchup of all the playoff teams, and have the better part of three days to rest and prepare themselves for the second season. 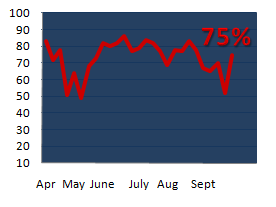 Throughout the postseason, we'll take fan confidence polls after each game to see how each game plays on our psyche. It may be a bit of overkill, but it should be an interesting thing to look back on. Until the next poll, Go Braves!