The Atlanta Braves top prospect, and the top prospect in all of baseball, Jason Heyward, has been named Baseball America's Minor League Player of the Year. It's a long article chock full of good info on Heyward. They got out of their way to compare Heyward to Jeff Francoeur, comparing the way in which the Braves brought each of those two players along.

Heyward started the year in advanced A-ball at Myrtle Beach where he hit .296/.369/.519 in 49 games. He was then promoted to double-A Mississippi and proceeded to blow those numbers away by hitting .352/..446/.611 in 47 games. It's hard to imagine that Heyward actually improved as he advanced up the organizational ladder. That improvement continued in triple-A Gwinnett where he spent just 3 games, and managed to hit .364/.462/.364 -- the only thing not emerging was his power.

Heyward is not an all-or-nothing slugger either. He walked 51 times on the season, and struck out only 51 times on the year. He also stole 10 bases, while only getting caught once. All of these stats also overlook the fact that during his first 100+ plate appearances at double-A, Heyward sustained a .400 average. This shows that he really came into his own this year.

He is currently playing in the International League playoffs with Gwinnett, and will compete next month in the Arizona Fall League, which last year hosted Atlanta's top prospect, Tommy Hanson, who became the MVP of the league. Can the Braves have back-to-back MVPs come out of the AFL if Heyward puts on a show like he did the second half of this season?

The Braves have had one other Baseball America Minor League Player of the Year, and that was Andruw Jones, twice. Once in 1995 and then again in 1996. 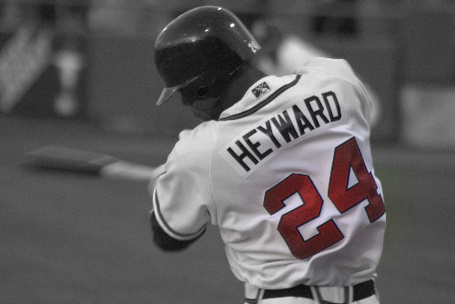 After the jump I'll present some choice quotes from the Baseball America article:

"Mentally, for one you've got to always understand it's just a game," Heyward said. "The struggles you have, it's an opportunity to learn, make an adjustment. You take it as it comes at you. I trust my swing, my abilities, my hands. The mindset going in, the way you get more comfortable, is knowing you're going to get another opportunity."

"We're always looking for weaknesses we can develop. In all honesty, I've spent two months looking for things we can work on, and it sounds crazy, but I can't find any," Wellman said. "That's a credit to his ability to make adjustments. He's very cerebral. He'll strike out twice on changeups, and I'll say, 'Now maybe there's something.' And the next time up, he'll hit a 2-0 changeup 500 feet.

"Good hitters do a good job of commanding their strike zone, swing at strikes and take the balls. He had an advanced ability, baseball maturity, strike-zone discipline," Kemp said. "I talked with him a little bit about that at Mississippi, how different pitchers were. You can see the maturity just in his answers.

"A certain number of teams that are going to see him more than once have a different plan for him. He understands he has to get good pitches to hit. He has a good hitting plan, making adjustments at-bat to at-bat."

Simplistic though it may be, the biggest difference between Francoeur and Heyward could be that Francoeur takes a football mentality to the plate: attack, attack, attack. Heyward's plan: wait, bait and bash.

"Wait, bait, and bash," I'm so reusing that! It cannot be understated that I am beyond excited to see Jason Heyward in Atlanta full time.