If you buy something from an SB Nation link, Vox Media may earn a commission. See our ethics statement.

This is the seventh installment of the terrific series by Chris Mays, highlighting several times that Hank Aaron faced racism. These were originally posted on his blog, The 8 Things, and are reprinted here with permission.

Everybody loved Babe Ruth. You will be the most hated man in this country if you break his career home run record.

When Hank Aaron arrived in Atlanta, he changed his game. Throughout his career, Aaron was one of those guys who had line drive power to all fields. He hit home runs that infielders thought they had a chance to leap and grab. The dynamics changed when he arrived at Fulton County Stadium. At the time, Atlanta was at the highest elevation in the league, which, when combined with the heat and humidity of the American south, led to the stadium receiving the nickname of the "Launching Pad". Aaron would abandon his style of hitting and begin to concentrate on pulling the ball. Year after year, the home runs would just keep coming.

If you had asked the baseball experts in the early 1960s, Aaron would not have been the man they picked to capture the home run crown. He would sneak up on the entire nation. In 1967, a reporter for the Milwaukee Journal dropped a hint that maybe Aaron was the man who would take Babe Ruth's record. Journalist Furman Busher would say the same thing later in Atlanta, but for baseball fans across the country, Hank Aaron was still operating under the radar. His 500th home run would come in 1968, and Aaron seemed to be at his peak as a power hitter. Nationally, his profile was raised considerably when he got hit number 3,000 during the 1970 season. Still, no one thought Aaron was the man to break the record. After hitting his 600th home run in 1971, people all over the country began waking up to the fact that Aaron was the man.

Throughout the early 1960s, many baseball fans thought that Mickey Mantle was the man who would break the record. He was the golden child of the New York Yankees and many believed that he was the rightful heir to Babe Ruth's throne. Mantle was a truly great ballplayer who may very well have made a run for the record, but injuries and hard living led to a late career slide in his numbers, and his career was over by 1968. Attention would then turn to the amazing Willie Mays. Mays was baseball's number one showman and he may very well be the best all-around player the game has ever seen. His numbers began to fall in 1967 and would never really recover. He would make it to 660 home runs but his body simply couldn't go anymore.

You can hit all dem home runs over dem short fences, but you can't take dat black off yo face.

There's little doubt that Mantle and Mays would have been treated better if they had made the run at Babe Ruth. Mantle was white, popular and a Yankee and would have been embraced with open arms by baseball fans all over the country. Willie Mays was also popular enough that he would have avoided much of the trauma that Aaron faced. Mays was always more acceptable to the white masses than Aaron thanks to his outsized personality. He would have encountered some racist resentment, especially in the southeast, but it's doubtful that Mays would have faced the same level of vitriol as Hank Aaron.

How about some sickle cell anemia, Hank?

Despite the best efforts of Mantle and Mays, if anyone was going to break the Babe's record, it would be Aaron. He had become, almost despite himself, a celebrity. The 1973 season would not be an easy one for Aaron. Despite his home run chase, the crowds in Atlanta were sparse for most of the season, and would stay that way until Aaron closed in on Ruth. (The Braves would draw their smallest crowd ever on the night Aaron hit his 711th home run.) Despite the relative indifference the home run race received in Atlanta, the rest of the country was stoked. Aaron would receive standing ovations night after night across the country. The problem was the few who didn't want to see the record broken.

I hate you!!!! Your such a little creap! I hate you and your family. I'D LIKE TO KILL YOU!! BANG BANG YOUR DEAD.

Aaron faced the usual racism that season, including an altercation with a group of white fans in May, but it was nothing compared to the hate mail. Letter after letter would arrive in the Aaron mailbox. Much of it was just garden variety hate, but it would occasionally cross the line into threats. The F.B.I. would begin to investigate much of his mail. There were even rumors of a kidnapping plot against his daughter. The treatment was outrageous, but it didn't cause Aaron to cower. He was scared of course, any sane man would be, but he turned the fear and the anger into determination. The best way, Aaron decided, to get back at the hatemongers was to claim the record for himself and for his race.

You black animal, I hope you never live long enough to hit more home runs than the great Babe Ruth.

As the season went on, stories were written in newspapers across the country about the hate mail. Many people were moved to write Aaron letters of support. Opposing teams would even put messages of support on their scoreboards. Aaron was moved by the support, and it would bolster his spirit. In the last series of the season, at home in Atlanta, he would close to within one home run of the Babe. When Aaron trotted out to left field after failing to tie the record in his last at-bat of the season, something special happened. The Atlanta fans, which had packed the stadium 40,000 strong hoping to see Aaron tie the record, began a spontaneous outpouring of gratitude towards Aaron. The cheering would last five minutes.

I hope lightning will strike you before next season.

Aaron was determined the end the chase as quickly as possible during the 1974 season. He tied the record during the first game of the season in Cincinnati. He would break it during the fourth inning in the first home game in Atlanta. An African-American man, Hank Aaron, would receive an impressive, sustained ovation by a mostly white crowd in the south for breaking the most hallowed record in the history of the game. I can't speak as to whether the struggles and the abuse were worth the outcome, but Hank Aaron's 715th home run was a landmark for the game of baseball and it was a landmark for race relations in our country. There isn't a baseball fan alive who doesn't get goose-bumps listening to Vin Scully's call of the historic home run for the Dodgers. Hopefully, there isn't a human being alive who isn't disgusted by much Aaron's treatment in the race for the record.

I am confident that a man of your caliber will instill in others the spirit and love that you have given to major league baseball. My heart and feelings are with you and your kind friendship will mean more to me than any other person in life. Proud to be your friend. -Ernie Banks 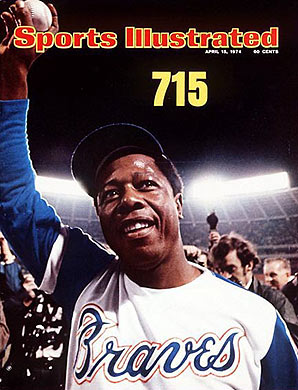 The quotes throughout this post are from actual letters received by Hank Aaron.

My primary source for the information in this series is Hank Aaron's 1991 autobiography, I Had a Hammer: The Hank Aaron Story