Did you know our new pitcher comes with drama?

Share All sharing options for: Did you know our new pitcher comes with drama?

It's not Benson-esque drama, or Manny-esque drama, but it's bordering on Chipper-esque drama. If the AJC has a gossip column, then it is going to have to get up to speed on this one. From the Boston Herald's "gossip" column:

Belated congrats are in order for one of our all-time favorite fun couples, ex- Red Sox hurler Derek Lowe and his new bride, ex- BC babe Carolyn Hughes .

The two tied the knot back in December, we’re told. Lowe, who was recently signed to a $60 million, four-year deal by the Atlanta Braves, showed up for his new-team press conference sporting a brand, spankin’ new wedding ring.

Word is, Derek’s kids from his first marriage were at the wedding ceremony. Which is ever-so-civil, considering the ugliness that transpired between their mom, Trinka, (D.Lo’s first wife) and the pitcher and his new bride.

You might recall that back in 2005, Derek walked out on T, his wife of seven years, and their three kids and moved in with Hughes, who was then working as a TV reporter for Fox Sports Net . Her beat: Derek and his old team, the L.A. Dodgers .

Needless to say, Hughes was relieved of her reportorial duties once Trinka called the network and informed them of the budding romance. Both Lowe and Hughes - who was also married when she and Lowe hooked up - divorced their respective spouses. And now, they can live happily ever after as man and wife. 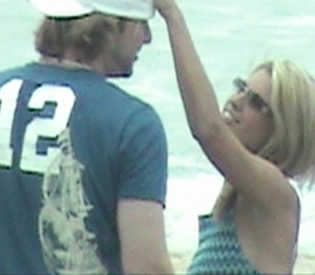 She's a looker, and it seems like Derek is in quite a trance. I think the Braves need some drama on their team. We've been boring for so long on the personal front.