Ken Griffey Jr. was made for the Atlanta Braves

Share All sharing options for: Ken Griffey Jr. was made for the Atlanta Braves

We've heard the last few days over and over, "Ken Griffey Jr. wants to be on the Atlanta Braves." Apparently he's wanted it for a long time, but the time had never been right for both sides, until now. And now he's the best free agent option left for Atlanta.

No, he's not Adam Dunn. He's not Bobby Abreu. He's not even Raul Ibanez. In all likelihood he will be a shell of his former self. Maybe it's wrong to bet a spot on the roster that he can live up to being a starting outfielder (or even a good half of a platoon), but isn't it worth the gamble to see if he has one last good year left in him? If he doesn't cut it, then we're right back where we were a week ago; seeing if Matt Diaz and Brandon Jones and any other internal options can cut it.

This is a team Griffey's always wanted to play for, it's a team his dad played for, and sometimes a player can overcome pain and age to rise to the occasion. Perhaps this is Griffey, and he wants to go out on top, instead of wasting away. We shall see.

Griffey, 39, met Monday with Braves general manager Frank Wren in the Orlando area and was expected to decide by Tuesday whether to sign with Atlanta or Seattle, where he last played in 1999.

This is a good outcome. Griffey will be a public relations boost to a team that has taken a couple of big PR hits this off-season, and his rumored contract leaves room for another nostalgic return of Tom Glavine. Despite what Keith Law says, one of the main ways the Braves maintain fan loyalty is by retaining their homegrown players, sometimes for longer than they should.

The guys over at Rowland's Office dug up this great pic of Griffey Jr. looking at home in a Braves uni. 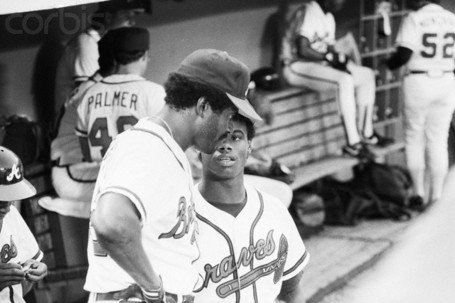