It wasn't long ago that the Braves felt they were set for years with Jeff Francoeur in right field. But declining and outright poor performances by him over the last few years finally caused the team to cut ties in the middle of the 2009 season, forcing them to play Matt Diaz out of position in right field for the remainder of the year. While this transition has been unsettling, right field looks to be locked up again for the forseeable future very soon, as the top prospect in all of baseball looks poised to claim the starting job at some point in the 2010 season.

What's not to love about Jason Heyward? Even before he grabs a bat or puts on a glove, you can simply marvel at his sheer size. He's blessed with a massive, strong frame, oozing with athleticism. Defensively, he's able to cover an outstanding amout of ground in right field, enough that he hasn't been overmatched the few times he's played centerfield in his career. Combined with his absolute laser beam of an arm, Heyward is a game winning force on defense alone. But then he steps up to the plate, where he not only has immense power, but and advanced idea of hitting that allows him to hit for average and take walks, making him an OPS machine. Add in a burgeoning knack for stealing bases, and he's showing himself to be a true five tool prospect, or, at worst, a four and a half tool prospect.

Over the years, many prospects overflowing with tools like Heyward have been unable to put up statistics to match their potential. That's not a prblem for him though, as he followed up an outstanding 2008 season that saw him put up a .316 average and .854 OPS, along with 29 doubles, 11 homre runs, 15 stolen bases, and 9 outfield assists, playing mostly for Rome, with a pheomenal 2009, split almost evenly between Myrtle Beach and Mississippi with a handful of games for Gwinnet, where he hit .323 with a .963 OPS to go with 25 doubles, 17 home runs, 10 stolen bases, and 14 outfield assists.

What's more impressive about those number is that he was able to put them up in 28 fewer games than in 2008, which leads to the only real knock on Heyward so far, that he seems prone to nagging injuries. He was forced to miss stretches of time with Myrtle Beach for minor oblique and leg injuries and was just forced to prematurely end his run in the Arizona Fall League due to an upper leg injury. Whether or not this is a trend or simply a fluke, perhaps created by his still growing body, remains to be seen, but if this is the only chink in his armor, it's a minor one, and it actually makes his production even more impressive when you consider that he might never have been fully healthy this season.

Heyward will enter 2010 as a 20 year old, not turning 21 until August. There are many who want to see him begin the season as Atlanta's starting right fielder, with just 52 games of experience above A ball on his resume. While it's possible, in fact likely, that Heyward could put up an outstanding Spring Training and force the Braves to make this hope a reality, it's more likely, given his age, experience, and the financial realities of baseball, that the Braves start him out at AAA Gwinnett like they did with Tommy Hanson, allowing him to dominate and hone his game, before calling him up June 1st, after he's avoided the possibility of reaching Super Two status down the line. 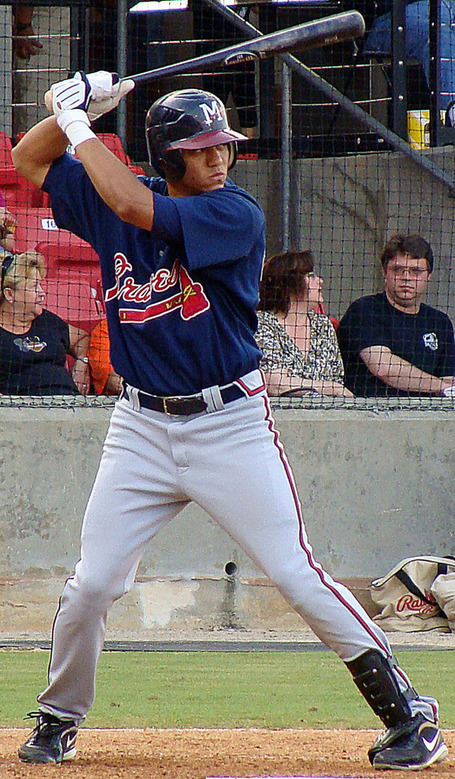 After an impressive 2008 season spent mostly with Myrtle Beach that saw him hit .278 with a .806 OPS to go with 28 doubles, 14 home runs, and 10 stolen bases, Rodriguez looked poised to assert himself as a top prospect as a 22 year old with Mississippi in 2009. But, like Travis Jones and Brandon Hicks, he saw his power evaporate this season, mostly due to his home ballpark, and put up a total line with a .263 average, .651 OPS, 19 doubles, just 3 home runs, and 9 stolen bases. Like Jones and Hicks, he suffered from a slight drop in his number of doubles, but saw his number of home runs plummet. In 209 home plate appearances he was terrible, hitting just .229 with an awful .534 OPS, but looked like himself on the road, where in 225 plate appearances he hit .295 with a .753 OPS.

Rodriguez is a fine defender, blessed with the combination of enough speed and an above average enough arm to make him capable of playing all three outfield positions. He did so in 2008, playing 30 games in center field, 39 in left field, and 40 in right field, but he settled into right field for most of 2009, playing the majority of his games, 72, there.

With his wild splits, it's hard to judge Rodriguez's season. He's obviously not as bad as the total numbers, or the home numbers, would indicate, but they still show that he needs to work on keeping the ball down and hitting it in the gaps. While he does have a strong, athletic body, he's never going to be a big time home run hitter in the Majors, so this is certainly a lesson worth having him learn. The best place for him to do so is probably right in Mississippi's park, which has supplanted Myrtle Beach as the most unforgiving to hitters in the system, so look for Rodriguez to return to AA to start 2010, with a promotion to AAA likely if he's able to master his home park. 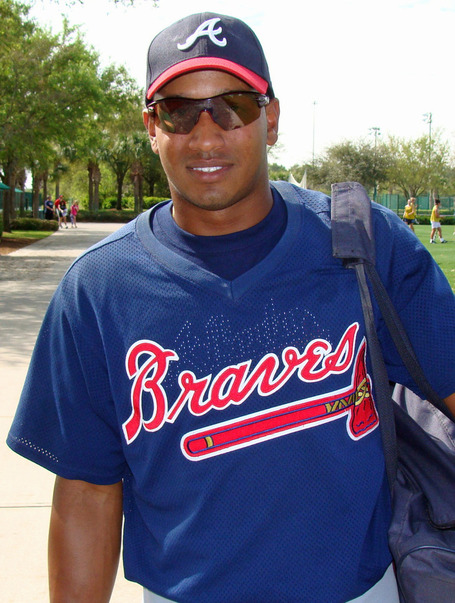 Sumoza is one of only a few players on the Talking Chop prospect lists who wasn't originally signed by Atlanta, having been acquired from the Red Sox in exchange for Mark Kotsay. It seemed like a great acquisition at the time, as Sumoza was having a fine year for short season Lowell (basically the equivalent of Danville), hitting .301 with a .915 OPS, including 15 doubles, 11 home runs, and 9 stolen bases in 51 games. But, playing this season mostly as a 20 year old, Sumoza wasn't able to repeat his success, putting up a .271 average and .681 OPS for Rome in 494 plate appearances, along with a very poor showing in 40 plate appearances for Myrtle Beach, hitting just .189 with a .466 OPS. He was able to club out 27 doubles for Rome this year, but he also proved weak at taking a walk, complining just a .316 on base percentage for the team. He also found stealing bases more difficult, swiping just 8 while being caught 11 times on the season.

While he's played a little bit of center field in his career, Sumoza has settled better into right field, where his speed fits better and he's able to make use of his above average arm, which allowed him to collect 13 outfield assists this season. But, he's also shown himself to be a bit of a butcher in the field, as evidence by his 11 errors this season. While his arm is certainly well suited for right field, his defensive short comings create huge offensive opportunities for the opponet, so it's likely that he'll shift over to left field as he moves up the ladder.

Of course, that move is predicated on Sumoza finding himself at the plate again. He'll enter next season as a 21 year old, so if he's forced to repeat with Rome he'll be a little too old to garner a lot of excitement as a prospect, but it also means he's still young enough to hope he turns things around. He has a strong, thick body capable of producing power, so if he can make better contact and take more walks, he could develop into another high risk/high reward outfield prospect. 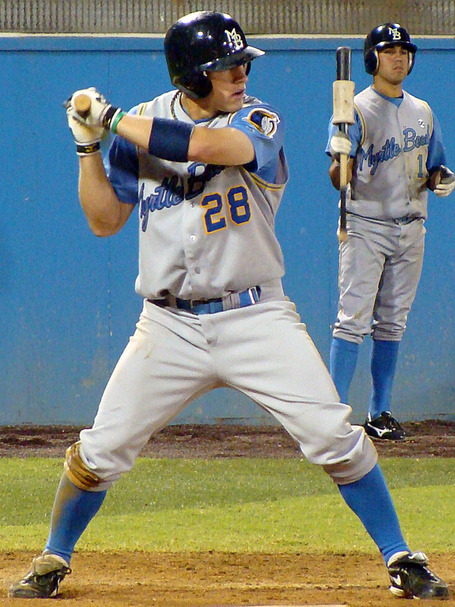 After being drafted in the 30th round in 2008, Shehan had a more than solid debut, spent mostly with Danville, where he hit .281 with a .776 OPS along with 12 doubles, 4 triples, 5 home runs, and 9 stolen bases in 283 plate appearances as a 21 year old. His full season debut was less successful however, as his numbers fell to a .253 average and .660 OPS with 24 doubles, just 3 home runs, and 9 stolen bases in 382 plate appearances. Oddly enough he was actually better at the higher level this season, posting a .261 average and .683 OPS along with 15 of his doubles in 144 plate appearances for Myrtle Beach, compared to a .248 average and .644 OPS in 238 plate appearances for Rome. While his season numbers certainly suffered as he lacked the home run power that he seemed capable of, what really hurt him was an inabilty to work walks, as he posted just a .302 on base percentage for the season.

Shehan has shown himself capable of covering all three outfield positions, and he actually played more games in center field this season, 41, than he did in left field, 26, or right field, 36. But, because he's a little thicker than the average center fielder, and a little slower, he profiles better at one of the corner spots. His arm is slightly above average, and he was able to rack up 8 outfield assists this season, but, like Sumoza, he was also befallen by a propensity to make errors, with a total of 14 this year. So while he is a solid enough outfielder, he isn't a superb one.

He will turn 23 a month into the 2010 season, so Shehan really needs to get things moving quickly if he hopes to keep himself from becoming an afterthought in the Braves system. He'll likely return to Myrtle Beach to start the year, and will need to get his walks up and his power back to assert himself into the Braves plans.

After playing for the Braves team in his native Dominican Republic, where he complied a .275 average and .784 OPS along with 23 doubles, 15 home runs, 14 stolen bases, and 138 strikeouts in 545 plate appearances over three seasons, Feliz made his American debut for the Orlando Braves in the GCL with a .257 average and .680 OPS in 156 plate appearances. Again, the strikeouts plagued him, as he whiffed 42 times, good for nearly one a game.

He split his time pretty evenly between the corner outfield spots, playing 22 games in right field and 20 in left field, racking up 4 outfield assists and 2 errors on the season. But, defense isn't going to be what gets him to the Majors, or keeps him from there, it's his offense. Falcon will enter next season as a 21 year old, so it's time for him to get his career moving. He needs to cut down on his strikeouts and take more walks, his .288 on base percentage this season was just unacceptable, if he wants to move up the ladder.

Feliz spent the vast majority of his time in right field this season, gaining 6 outfield assists and 4 errors in 41 games. Like Falcon, his defense is neither good enough to make him a Major Leauger, or bad enough to prevent him from becoming one; his offense is what needs work. Feliz will enter next season as a 22 year old and the minimal progression he showed this year compared to last, though his improvment in walks was very impessive, leave little indication that he's likely to rise very high in Atlanta's Minor League stystem.