2009 saw Yunel Escobar continue to assert himself as one of the top shortstops in the National League and with the dearth of shortstop prospects in Atlanta's farm system, that's a huge blessing. The top two players on this list were unanimous selections by the bloggers, though after that the pickings became so slim that it left ties for both third and fourth place, with none of those players looking at particularly bright futures. And, even with the talent at the top, there are questions about whether or not those players will be able to stick at shortstop. Clearly, Atlanta is fortunate to have Escobar.

The jump to AA clearly affected Hicks as he hit just .215 with a .651 OPS in April. He was also affected by his home ballpark, as he hit just .214 with a .624 OPS at home for the season, compared to .258 with a .754 OPS on the road. Despite these struggles, he seemed to turn things around toward the end of the season, hitting .248 with a .773 OPS in 123 August plate appearances, followed by a torrid finish where he hit .400 with a 1.300 OPS in 24 September plate appearances. This turnaround, combined with the fact that he actually decreased his strikeout rate from the previous season, hint toward Hicks' ability and speak highly of his future.

Hicks has been routinely praised as a top tier defensive shortstop and while his range is nothing spectacular, he takes good routes on balls, has a strong, accurate arm, and rarely makes mental mistakes. While his error total did increase in 2009, some of that could be attributed to taking his poor hitting out to the field with him. Hicks is extremely competitive and has a tendency to be too intense at times. But, while this can occasionally be adverse to his play, it's mostly a huge positive, and part of what allowed him to succeed toward the end of the season.

Hicks is playing out in the Arizona Fall League and regardless of how well he does out there, he'll likely begin 2010 at Mississippi again. He'll need to refine his swing and create more line drives to allow his power to come naturally. He's a big, strong kid and may grow out of shortstop, necessitating a move to third base. But, while he's a bit older than most top prospects, Hicks' talent is obvious, and it's not out of the question that he could see time in Atlanta by the tail end of 2010, though he's more likely to begin making an impact in late 2011. 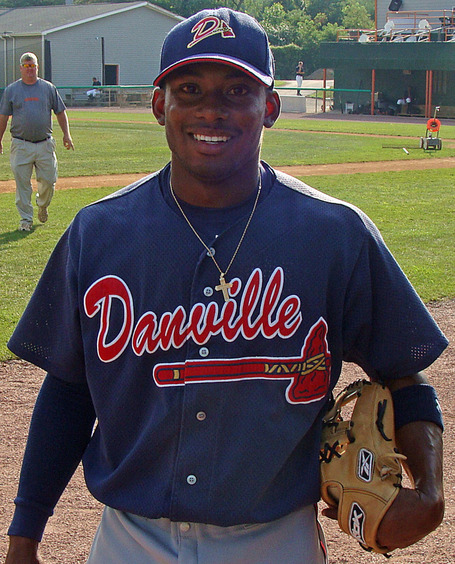 2. Myke Jones B/T: R/R Born: 5/30/1987 Ht: 5'10" Wt: 165
Selected in the fourth round, Jones was Atlanta's third highest draft pick this season. While he was an integral part of Danville's championship team as their leadoff hitter and shortstop, his season wasn't as dominant as you'd hope for a player who was several years too old for the league. His overall numbers were decent for a middle infielder, as he hit .258 with a .767 OPS along with 19 stolen bases, but after hitting his stride in July with a .280 average and .899 OPS, along with all four of his home runs, the length and grind of the professional season seemed to catch up to him, as he hit .250 with a .657 OPS in roughly the same number of at bats in August. He also struggled mightily against left handed pitchers, hitting just .160 against them with a .501 OPS in 50 at bats.

Jones is wiry and athletic, and despite his 18 errors in just 64 games for Danville, he brings an advanced approach and solid instincts to the field. While his arm is adequate enough for shortstop, it's not a plus tool, and that combined with the fact that his body is unlikely to hold up to the punishment that a shortstop takes day in and day out may force a future move to second base.

Because he'll turn 23 early next season, Jones is already a little bit old, so it's likely that he'll begin next season at High A Myrtle Beach. While he didn't dominate at Danville, he'll be able to take his professional experience and the knowledge of what it takes physically to play the professional game and attack the higher level. He is an outstanding athlete and while his line drive stroke does create occasional power, he doesn't get caught up in trying to play outside of his line drive/speed game. He's an intriguing prospect, and while he may never be a top flight player, it's very likely he'll reach his celing as an adequate Major League middle infielder. 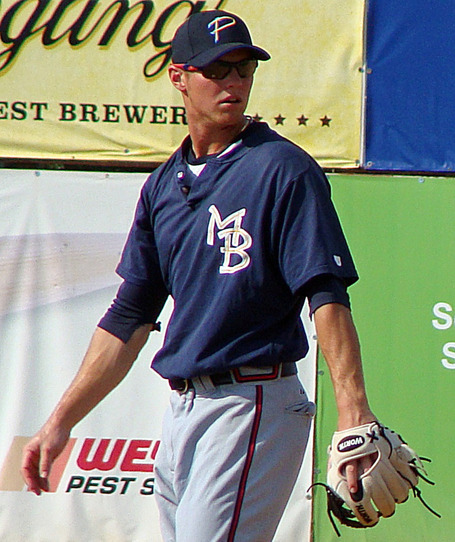 T3. Randy Gress B/T: RR Born: 12/6/1984 Ht: 6'3" Wt: 180
Gress became something of a joke here on Talking Chop, as some posters chose to poke fun as his light hitting, ironically saying he was a better prospect than Jason Heyward. While it's certainly unfair to make light of a young man who has shown himself capable of playing professional baseball, something very few can say for themselves, it's true, Gress isn't much of a prospect. He spent this season bouncing between Danville, Rome, and Myrtle Beach, hitting just .222 with a .588 OPS as a part-time player. Gress has never been a full-time player in his career, ammassing just 546 plate appearances in his three seasons, and it shows in his numbers as he has just a .196 career average and .535 career OPS.

Gress does possess a strong body and decent speed and he's a capable fielder at any of the four infield positions, playing each for all three teams he was with this season. He's an excellent teammate and while he's never been happy with his lack of playing time, he's always been dilligent about putting in the work it takes to remain a professional and has been a helpful and accomadating teammate. He'll be 25 entering next season and there's little reason to suspect he'll be any more than a backup next year as well.

T3. Fernando de los Santos B/T: R/R Born: 1/18/1990 Ht: 6'1" Wt: 180
Fernando de los Santos was signed by Atlanta out of the Domincan Republic in 2008 for $100,000 and he showed them enough in Extended Spring Training that he made his professional debut in the Gulf Coast League for the Orlando Braves in 2009. Unfortunately, he didn't show much during the season, batting just .229 with a .612 OPS in 120 plate appearances. He didn't show much pop or speed, and made 6 errors in just 29 games, but he'll be just 20 years old entering the 2010 season, and he has good size for a shortstop, so there's reason to believe he'll be able to make sizeable advances in his second professional season, which will also be just his second year in the US.

Where de los Santos starts 2010 is up for debate. There's a possibility he returns to the GCL, or he may again impress the coaches in Spring Training and earn a promotion to Danville. There's also a possiblity that he could follow in the footsteps of countryman Yoel Campusano and return to the Domincan and play in their summer league. After a poor debut in the US, Campusano took this route and revitalized his career. Wherever de los Santos plays in 2010, he'll need to perform better if he wants to assert himself as a legitimate prospect. 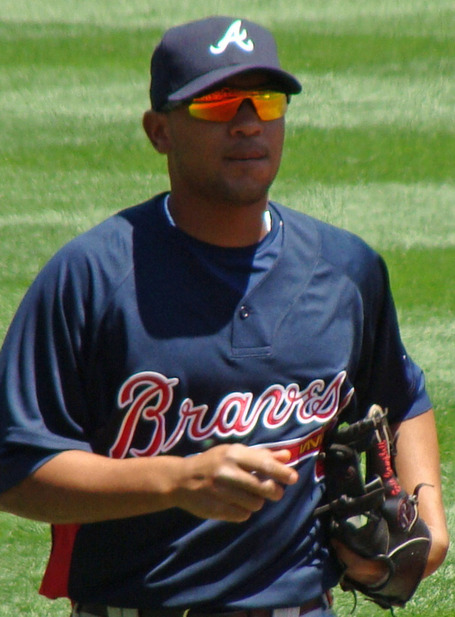 T5. Diory Hernandez B/T: R/R Born: 4/8/1984 Ht: 6'0" Wt: 185
Many soured on Hernandez after he spent the entire months of June and July with Atlanta, filling in for the injured Omar Infante and the banged up Yunel Escobar, and hit just .141 with a woeful .410 OPS in 93 plate appearances. But, surrounding this poor showing in his first chance at the Major League, he put up another solid Minor League campaign, hitting .319 with a .821 OPS for AAA Gwinnett in 234 plate appearances.

After scuffling to a .241 average and .644 OPS playing mostly for Myrtle Beach in 2006, Hernandez turned things around with solid seasons in 07, .308 average and .795 OPS for Myrtle Beach and Mississippi, and 08, .287 average and .710 OPS for Mississippi and Richmond. He doesn't hit for much power, hitting seven homers each of the last three season before hitting only one this year, and his stolen bases have evaporated as he's moved up the ladder, but Hernandez utilizes a solid line drive hitting approach that makes him perfect as a number 2 or 8 hitter.

While he's played the vast majority of his games at shortstop, he's also played nearly a season's worth of games over his career at second base and about a half season's worth at third. He's a solid defender at each, posessed with a good, accurate arm. If he were asked to perform in the Major League for an extended period, his best fit would probably be at second base, but he's solid enough at all three positions to place himself as an ideal candidate for utility infield duty. Hernandez will return to Gwinnett to start the 2010 season as a 26 year old, looking to refine his skills until and oppportunity for a full-time job on Atlanta's bench opens for him.

T5. Chris Lovett B/T: R/R Born: 12/21/1988 Ht: 6'0" Wt: 180
Lovett was drafted out of Columbia State Community College in Tennessee in the 12th round this year and his debut for the Orlando Braves in the GCL was less than spectacular, as he hit for a .231 average with a .674 OPS. While he did rank seventh on the team with 12 RBI, tieing fellow shortstop prospect Fernando de los Santos, he was also third on the team with 9 errors, making them in just 35 games. He'll be 21 entering next season, so it's going to take a good Spring Training and strong start to the season for Lovett to really establish himself as a prospect.

(All photos by CB Wilkins)