Share All sharing options for: Braves Top-5 Second Base Prospects

The Braves have been fortunate enough to consistently fill their second base position with homegrown talent over the last three decades. Aside from small stretches by Brett Boone and Quilvio Veras, the mantle of starting second baseman has passed from Glen Hubbard to Mark Lemke to Marcus Giles to Kelly Johnson and now to the newest in the string of Atlanta-developed second sackers, Martin Prado. The position has remained solidly, if not spectacularly, filled and the next wave of prospects hints at more of the same. Atlanta's current bevy of second base prospects is fairly lacking in top flight talent with huge celings, but it's a group of solid players who all seem likely to reach their personal potentials.

Mississippi's park has become known as a pitcher's park, as notoriously hard to hit home runs in as Myrtle Beach's park, and that coupled with the natural trials of the adjustment to AA, considered the hardest adjustment in professional baseball, led to Jones' first half struggles. In 228 at bats before the All-Star break he hit just .224 with a punchless .637 OPS, but rebounded amiably after the break hitting .290 with a .819 OPS in 138 at bats.

Jones is a solid, reliable defender who combines good instincts with plus range. He doesn't have the arm to play shortstop, nor the body to play third, and he's played neither position as a professional, so there isn't much of a chance that he'll be able to work his way into the Major Leagues as a utiliy infielder. But, the power/speed combo that he showed in 07, 08, and the second half of 09 suggest that he has the tools to be an everyday starter for a Big League team. He'll begin next season as a 24 year old, so there's not much chance that he'll develop into a high octane, incredibly exciting player, but he's certainly in the Braves mold of a dependable, solid second baseman.

Due to his second half surge, a great Spring Training could propel Jones to AAA Gwinnett, but it's more likely the Braves allow him to repeat his success at AA, at least for the first half of the season. Either way, he'll need to continue to work on keeping his swing correct and aiming for doubles instead of home runs. His history suggests he's never going to hit for a high average, but he still gets on base at a good clip and has shown a knack for situational hitting. Jones doesn't have the highest ceiling in the Braves' farm system, but his combination of slugging and speed make him a valuable component in a lineup and he could help Atlanta as soon as the end of the 2010 season. 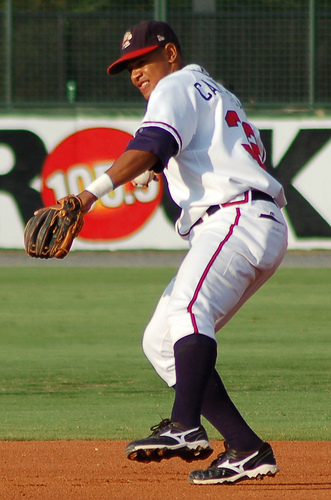 2. Yoel Campusano B/T: R/R Born: 12/14/1986 Ht: 5'11" Wt: 200
Campusano, who has alternately been known by the first names Joel and Albaro, comes in at second on the list after garnering Rome's Player of the Year honors by hitting .288 with a .730 OPS. Despite this accolade, 2009 wasn't exactly an outstanding season for him, since at 22 he was several years too old for the league and didn't dominate in the way that a player that old should have.

Despite a slightly stocky body, Campusano has a fair amount of quickness and is a solid defender. He began his career as a shortstop, but as his body has filled out he's found himself better suited for second base. But, while his body is well suited for second, it limits him offensively; despite his build, he's not blessed with much power, and he doesn't have the speed to steal enough bases to make him a dynamic hitter.

Like Jones before him, Campusano is a fairly polished player. He's too old to imagine a huge boost in his tools, but he's been steady enough to suggest he won't regress much either. He'll go into 2010 as Myrtle Beach's starting second baseman and look to continue to build on his Minor League resume. 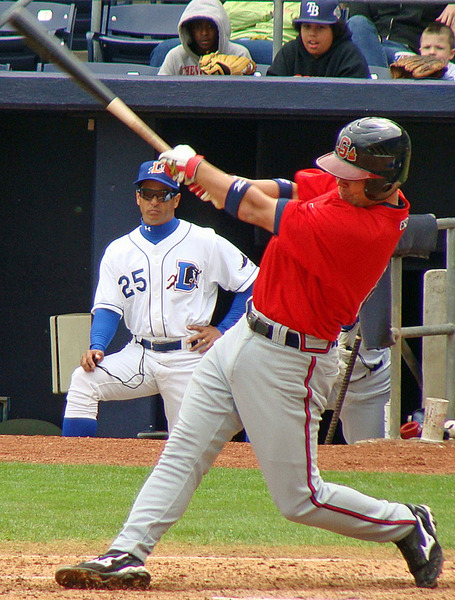 3. JC Holt B/T: L/R Born: 12/8/1982 Ht: 5"9" Wt: 175
Holt will be 27 entering the 2010 season, so he's hardly the typical prospect, and, despite consistently being a year or so old for the level he was playing at, he's never dominated, compiling a .711 OPS in his six Minor League seasons. But, he's working on his versatility to make himself a more attractive player, going back to the outfield, where he excelled in college, and playing nearly as many games in left field this season as he played at second base.

An August knee injury cut short his 2009 season, but Holt was working mainly as a part-time player even before that, compiling a .282 average and .697 OPS in 302 plate appearances. While he's never been a terror with the bat, he does supplement his lack of power with speed, stealing an average of 25 bases over the last four seasons. He uses his speed well, both at the plate, where he regularly bunts for base hits, and in the field, where he has plus range both in the infield and the outfield. But, his small frame (that he's listed at 5'9" tall is a comical lie) doesn't allow for much of an arm, so he's not likely to be an adequate defender at third base or shortstop and while he'd certainly have the range for center, his arm would be a liability there.

Holt is a completely finished product; you know what you're going to get out of him, an average somewhere in the .270 to .280 range, a low .700 OPS, and around 25 stolen bases. He'll spend 2010 once again refining his skills in Gwinnett, hoping for an injury that will allow his particular set of skills to be useful in the Major Leagues. He's unlikely to be protected on Atlanta's 40 man roster, so a team looking to stash his speed and versatility at the end of their bench might find him attractive. 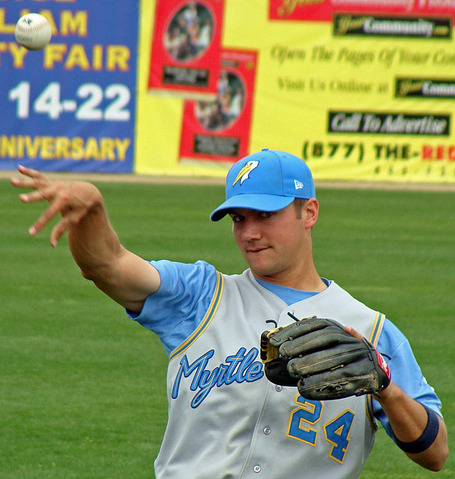 4. Michael Fisher B/T: S/R Born: 3/22/1985 Ht: 6'2" Wt: 188
Fisher's inclusion on this list is a clear sign that Atlanta is not deep at second base in the Minor Leagues. Despite being several years old for the league at 24, he put up a poor showing at Myrtle Beach, hitting just .238 with a .590 OPS. He showed almost no power, slugging just .296, and doesn't have the speed to make up for it. Add on to that the 18 erros he made and things aren't looking good for Fisher's future.

He'll be entering 2010 as a 25 year old, so at this point Fisher can't be looked at as anything more than organizational filler. He's likely to return to Myrtle Beach if only to supplement the roster and aid the younger players. Even if he is able to make a dramatic turnaround in his career, he'll need to prove himself at AA and AAA before he can be counted on for Atlanta's future.

5. Jim Linger B/T: R/R Born: 9/6/1990 Ht: 5'11" Wt: 195
Linger sneaks onto the end of this list based on potential alone. When he was signed out of Australia last year he was considered the top amateur talent in the country and represented his homeland in this year's World Cup Tournament. His introduction into professional baseball was a little rough, but not without its promise, as he hit for a .273 average and a .688 OPS in 142 plate appearances for the Orlando Braves in the Gulf Coast League. While these numbers aren't spectacular, he did show improvement as he acclimated to playing in America, ending the year hitting .303 with a .748 OPS in 76 August at bats while collecting both of his home runs and 6 of his 8 RBIs on the season. Originally signed as a shortstop, he has settled in at second base as a pro, utilizing his rangy frame and athleticism to make himself a plus defender.

Australians often take longer than players from other foreign countries to develop as the level of play isn't as competitive, so it's not out of the question that Linger will be slow to develop. With a good showing in Spring Training, he could find himself as Rome's starting second baseman in 2010, but it's more likely that he'll stay in Extended ST and begin playing with Danville in June. Either way, Linger is young enough that there's room to be patient with him and his combination of athleticism and potential make it plausible that he could be at the top of Altanta's second base prospect pile come this time next year.

(All photos by CB Wilkins, except Campusano by Chip Jett)