Braves First Base: The Now and The Future

Share All sharing options for: Braves First Base: The Now and The Future

At the major league level…
… the ultimate product of Elvis Andrus, Jarrod Saltalamacchia, Neftali Feliz, Matt Harrison, and Bean Jones is Casey Kotchman. Like the trade, hate the trade, whichever camp you fall into one thing is likely true; Kotchman is better than Scott Thorman, but not as good as Adam LaRoche… yet. The big problem with Kotchman is that he is not (yet) the power hitter that corner infielders are supposed to be. He’s still young, and already has five years of experience, so there certainly seems to be room to grow.

Take Kotchman’s 2008 season with the Braves with a grain of salt. He was out from under the protective wing of the Angels organization for the first time ever (since he was a kid playing catch with Garrett Anderson). He had to get used to a new league, a new team, and new teammates. Add to that his mother’s illness that caused him to miss a couple of weeks between August and September, and the amount of distractions could have caused anyone’s performance to slip. Kotchman came back at the end of the season to hit over .300 in September, so that gives the Braves some hope for next year.

He’s got the first base job next year, and he’s not likely to get pushed until at least 2010. If he can continue to build on the ceiling some think he hasn’t reached yet, and the Braves can develop one of these prospects, then we’ve got a good trade candidate late next year or next off-season. In the mean time, he should be a decent first baseman; not great, but decent.

The future Braves first baseman…
… without much of a doubt, the presence of Casey Kotchman is just as a placeholder until Freddie Freeman is ready. This southern California kid had to get used to the humid southeastern weather, but after struggling through the heat in the Gulf Coast League last year he acclimatized himself this year at Rome.

While his power waned a bit in the dog days of August, Freeman’s average stayed strong and his ability to be a run producer with good plate discipline continued to improve. It’s tough to slap a sure thing label on a kid who has one great year of single-A to show what he can do, but this winter you’ll see Freeman’s name begin to be mentioned among the top first base prospects in the game… oh, and he doesn’t turn 20 until next September.

There’s a lot to be excited about with Freddie Freeman. He is undoubtedly one of our top-5 prospects, but we still have to hope that he keeps up his performance as he moves up the minor league ladder. 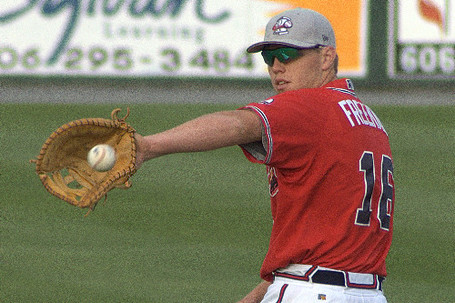 More for future consideration…
2. Kala Ka’aihue – Oh, Kala, you tease us with your intermittent ability. After struggling after a promotion to Mississippi last year, and a slow start in April, he found his form and kept improving all year. He hit over .300 the last three months of the season and he becomes a better hitter when runners are on base and in scoring position. He’s a mature player and reportedly one of the leaders on the team. The Braves should send Ka’aihue to triple-A next year, and we’ll see if his struggles return. If they do, there will be many who doubt whether he can successfully make the jump to the majors.

3. Ernesto Mejia – A product of our Dominican club, Mejia is a little old for the level he’s playing in, and he hasn’t produced the kind of power in the past that he showed this year at the Beach, but his .505 slugging percentage was tops on the team and 21 homeruns and 47 doubles are hard to argue with. In fact, his 47 doubles led all the minor leagues. It’s possible he’s blocked by Ka’aihue and Canizares at first base, so a move back to the outfield or a lot of DH’ing may be in his future – a very likely possibility as Mejia led the team with 23 errors. Mejia also needs to improve his plate discipline before being considered more seriously, but again, with that kind of power he at least deserves a second look.

4. Barbaro Canizares – The Cuban defector is older, at 28, but he showed good power and good plate discipline at triple-A so there is a chance we will see him in Atlanta next year as an injury replacement or power bat off the bench.

Others:  Alberto Odreman (only 19 and showed good power in the DSL, led the team with 10 HR and 40 RBI); Daniel Falcon (another power product in the DSL, could be getting a little old for the league); Gerardo Rodriguez (Yankee castoff got off to a hot start at Danville, but came back down to Earth as the season progressed); Ryohei Shimabukuro (Japanese bonus baby is developing slowly, especially in the power department).